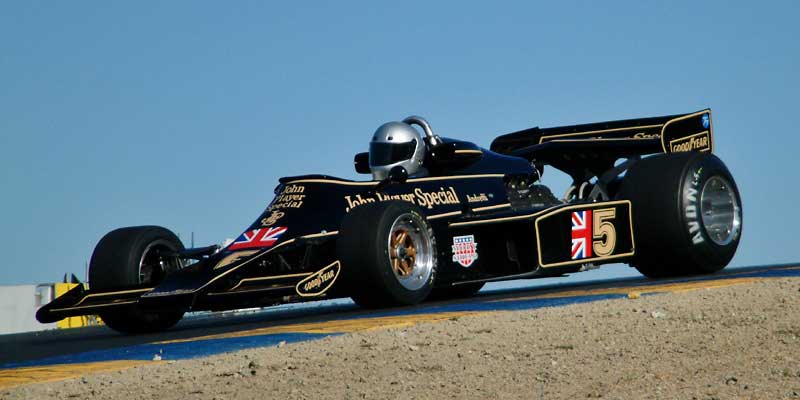 It seems that a car that looks good will go well too, just look at Williams this year in Formula One (2014). They have arguably the prettiest car and simplest race livery design on the 2014 Formula One grid and they have also seen an upturn in performance, now obviously there is no direct correlation but fans do get behind a team and interact with them more, if they like what they see. We are going to look through the different racing disciplines to bring you, in our opinion, the best race livery design in terms of sponsor exposure, design, colouring and the success of the team. We will start at the pinnacle of motorsport, Formula One.

The Lotus F1 team have a mixed history, dominance during the 60’s and early 70’s, followed up by poor form in the 80’s. The reincarnated team have seen success with podiums and a race win in each of the 2012 and 2013 seasons, but they haven’t been able to recapture their early dominance. However, results aside, the public don’t really care. Lotus have always been, in a similar way to Williams, the people’s team. A plucky midfield team that took on the big boys and beat them at their own game, a team that looked worrying at the beginning of a weekend but still produced some inspired performances. And half the reason we all watched and willed them on was because of that iconic black and gold JPS race livery design, you saw the car coming. The car stood out from the rest of the grid, it gave the team TV exposure and caught the eye of the public. From a sponsor point of view this was great, they were getting plenty of TV exposure, they were the main sponsor on the car and they formed part of the team name. The measure of a good sponsor-team link up is how often they are associated together and how well the sponsor activates the link with events, public interaction and product pushes. No one has ever had quite so much success in doing so as JPS and Lotus. JPS may not have had the same activation but they did have a clear association with the team. As soon as you think of a Lotus F1 car you think of the black and gold JPS livery design. Even the current cars from 2012 onwards get referred to as being JPS black and gold.

We are not sure how JPS utilised its partnership with Lotus back in the day, whether it was adverts, cars at launch events or images for products, but for a current team there are many more opportunities to market themselves and increase public awareness. Twitter, Facebook, TV adverts, online adverts and public events are some of the main platforms at a team and sponsors disposal which would give them a huge audience to interact with. JPS wouldn’t have had all of these back in the day which is why it is impressive how well known the brand became due to a successful and well designed partnership and livery design for Team Lotus at the time. It is also why it is criminal to see sponsors for current teams not activating their partnerships more when they have so many added platforms to do so now, using it to create cool online apps, competitions or just pushing new products. Santander are the best at doing so currently by using their associated sports personalities for adverts. Even still, much more could be done using incorporated hashtags, Facebook pages and race livery design of the cars to increase public awareness and reap the rewards as a result. Take a look at our Sponsorship Activation blog for more on how to start making sponsorship more effective or we can create your Livery Design too.