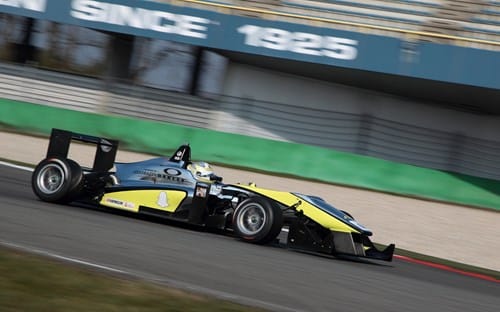 Gustavo Menezes is a racing drive with the Van Amersfoort Racing Team, racing in the FIA European Formula 3 series. His car is pictured above and the first thing you will realise is that the car looks like the love-child of a McLaren and a Jordan F1 car. Snapchat motorsport sponsorship has seen the car transform into a head turner. The chrome sparkles in the light, making the car very easy to pick out on the grid or flying round the circuit, while the yellow sections of the car break up the lines of the car, with the black streamlining the whole design. For us it is one of the nicest looking cars on the Euro F3 grid and hopefully, depending on where Gustavo goes in his career, the design will go with him and we will get to see a shiny GP3 or GP2 car in the future.

He has improved greatly over the course of the season so far, finishing regularly in the top 10 now, picking up two podium finishes in Belgium. Career stats and race livery design aside, the main point we want to talk about though is how Snapchat motorsport sponsorship is utilising the asset they have in Gustavo Menezes. For those of you that don’t know, this is one of the best Motorsport sponsor-driver links we have seen in a while, with glimpses into Gustavo’s training and race weekends being posted to his ‘Story’ on Snapchat. As a fan it makes you feel really linked to the driver, seeing things that aren’t broadcast, it allows you to follow his career very closely. This is vital in building up your audience and targeting the right marketing demographic. Snapchat is a very popular and current app that is used by millions and millions of people, so to be able to tap into that audience is great and posting unique content such as the track walks and training sessions, engages fans and gives them something to interact with. This as a whole makes the driver much more marketable and attractive to prospective sponsors as they see a positive correlation between the driver and effective exposure for their company, leading to a good ROI.